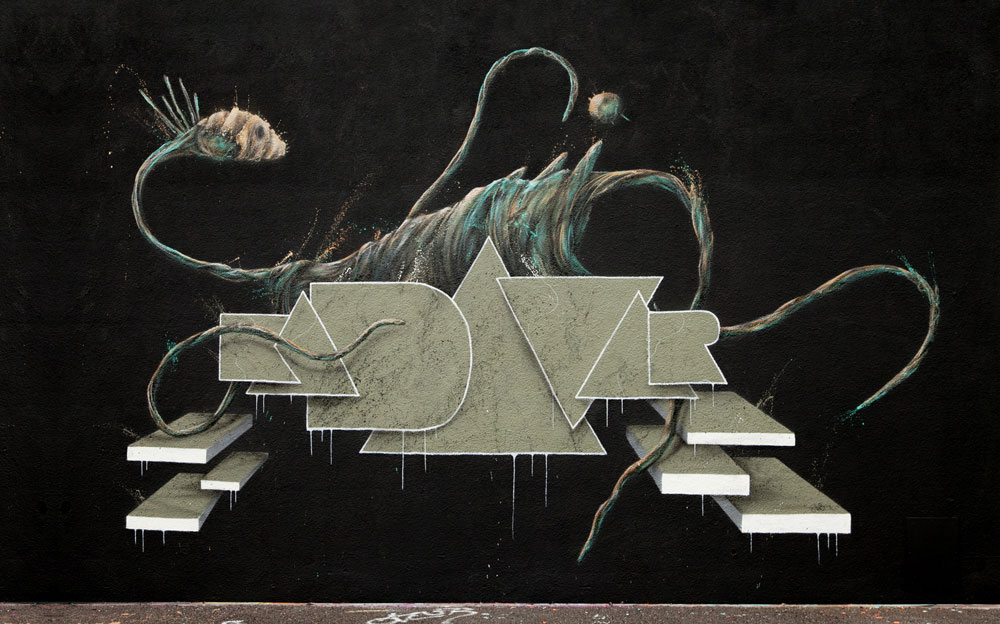 Berlin, Germany-based classic rock overlords KADAVAR have shot a video with contemporary artist dust in Bern, Switzerland for their song ‚Eye Of The Storm‘. The song comes off the band’s most recent album »Abra Kadavar« and marks the end of the 2 year cycle promoting the album by relentless touring across the globe.

The unique symbiosis of rock and street art united in a video is what makes this video so special. The story is quite simple: KADAVAR and dust meet in Bern, hang out together, and KADAVAR hits the stage as dust paints a mural.

How did it happen? Although KADAVAR have spent the last three and a half months, non-stop, recording the new LP, a big concern for the guys from KADAVAR was a final tribute to the last album, which should be something special. So, the common idea of this crossover project with the internationaly-renowned street artist, David Stegmann aka dust, arose.

„When you combine auditory and visual impressions together, it can always create something new. We found it very exciting from the start, putting out our feelers and combining one one of our songs with street art,“ added Tiger, the man behind the drums. The song ‚Eye of the Storm‘ provided the perfect setting for this: „The video should feature a live perfomance of us, so we wanted to play a song, which simply has power. That’s why we both thought ‚Eye Of The Storm'“, adds Tiger.

dust asked for a turn in the action: „For me, it was a very exciting encounter because the music of KADAVAR has an almost symbiotic relationship with my painting, and is always very inspirational for me while I work. My series, „Koerperwesen,“ almost felt created for it, like a strange creature, it meanders up from the shadows behind the logo of KADAVAR (laughing). A truly brilliant, unforgettable evening. It was an honor to do this.“

The video combines dust’s grandiose mural painting in action, with a unique concert by KADAVAR at the legendary ISC Club Bern.